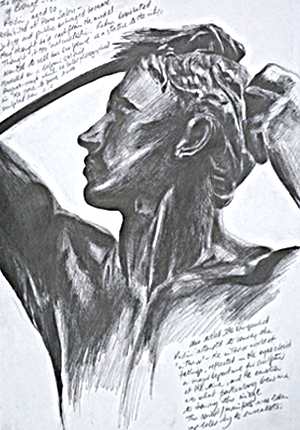 It’s surprising what you learn…

Towards the end of last year I visited the V&A sculpture gallery to do a figure drawing from a sculpture. (The advantages are that I don’t have to pay for the model and they don’t move.)

There’s some fabulous work at the V&A and I finally decided on a Rodin, The Age of Bronze, originally titled The Vanquished. There was something about it that seemed to me expressive – emotional almost. It was black and glossy and the musculature was well-defined but realistic, so different from the exaggerated bodies in smooth white marble that were well represented in galleries, but that always looks ‘lifeless’ to me.

I found a stool and sat down around half 10 and got to work. Although visitors were milling around and there were lots of school parties, most of the time it’s relatively easy to block them out. Some people looked over my shoulder or came to chat and the kids were funny..”Hey, mister, you can’t half draw”, it’s good to have positive encouragement from any quarter.

About 12pm a tour guide arrived with a group of women and asked if he could tell them about the Rodin, and did I know that it was highly controversial when first exhibited at the Paris Salon in 1877. He explained that Rodin was keen to sell his sculpture to the city grandees, but the judges and public were outraged by it and accused Rodin of casting from life, so ‘naturalistic’ was the work. Rodin was devastated.

He later proved he sculpted from life by showing photographs of his model, Auguste Neyt, a Belgium soldier, in the same pose and explained the differences between model and sculpture. It was some years before the work was accepted as the masterpiece it was and purchased by the city fathers.

I went back to the V&A a couple of days later to spend some more time on the drawing, and the same guide came around with another group. This time I asked him to fill in some of the gaps from his previous talk…it was fascinating.

Part of the controversy that surrounded the sculpture was that the eyes were closed, very unusual at that time. Rodin’s intension was to convey the ‘interior’ world of feelings. Perhaps this is what attracted me to the sculpture in the first place, as I try to communicate what’s going on behind the surface features of the people I draw, in an attempt to capture their mood.

It was a great experience and I plan go back to the V&A to draw another Rodin sculpture in this coming year, maybe the same guide will come around again.

More about the Age of Bronze: