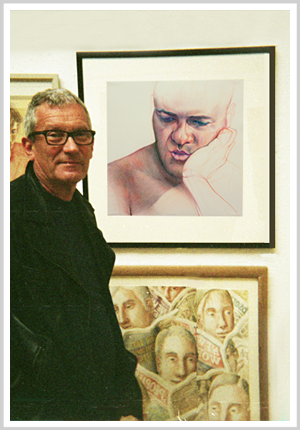 My drawing of Omar was accepted for hanging at the Royal Academy West Open Exhibition 2015. So I’m feeling pretty pleased as it’s the first time I’ve had a picture accepted for an major Open Exhibition. The Royal West of England Academy is the only regional Royal Academy in the UK and this year saw the largest ever number of entries for their 163rd show. The Private View was held in their galleries on Saturday 3rd October and I drove down from London to see how it looked on the wall amongst all the other art, and of course get a selfie with it.

I originally submitted three drawings as digital images and got two Pre-Selected. I then had to deliver the framed works to Chelsea Art Moves who would ship them to Bristol for the final selection. I then waited in trepidation and was very surprised on the day that the final selections for hanging were announced that they 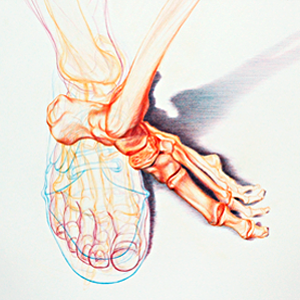 had chosen Omar over the other drawing, One Black Van, which I thought more interesting.

One Black Van features the bones of the foot, the flesh of my foot and one of my black Vans (trainers) created in colour pencils. This drawing is one of a series of anatomical drawings inspired by the drawings and teaching of Emily Burton. The first was a skull and titled We are all made from the stuff of the stars. This was followed by Holding Lucy’s hand and the most recent. The fifth rib to see them all go to: http://www.richardtomlin.co.uk/anatomical-drawings/