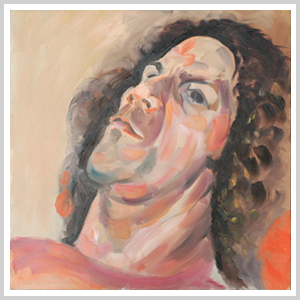 I’ve always liked Tim Benson’s portraits and this expressive brushwork and colours. I initially saw his work at an exhibition by a group 6 portrait painters, that included Adele Wagstaff and Jonathan Yeo, at the gallery at St Paul’s School in Barnes. I really admired the portrait of his grandmother.

So when I heard that he was taking a masterclass at the Mall Galleries in August I signed up in eager anticipation. A friend lent me a video of Tim creating three portraits which gave me an idea of what to expect…little did I know!

We were told to bring three small canvases and one large one and I couldn’t imagine using all four in one day. There were about 10 of us and Tim started off the day by talking about his approach and how the day was going to pan out.

We were to use just 6 colours, Cadmium Lemon, Cadmium Red, Alizarin Crimson, French Ultramarine and Titanium White, and one of which I hadn’t used before – Burnt Umber. We were to use one large brush for everything, painting wet on wet and applying it in one stroke. We would have to work fast, as we were to paint three portraits in the morning, each of about an half an hour and between each move positions, so we’d have a different view. It seemed impossible and very challenging, but we all produced something in the limited time. Lunch was a welcome break and on our return were told we’d have the rest of the afternoon to do one portrait on our largest canvas, mine was 24×24”. Three hours seemed relatively an age compared to the morning, but to make it more difficult Tim got the model to lie on his back so we got an extreme perspective.

I got started and quickly blocked in the head but soon was told I had the angle of the face wrong. So I wiped it all off and started again. It seemed to be going better until Tim said I’d placed the nose to low as the perspective visually positioned it higher. I wiped it out again and had another go, it started to look a little like the model. The three hours speed by, it was really enjoyable but very tiring. Working all day is very intense and I could have done with a lie down afterwards. I felt I had learned a lot and although the end result is no great painting it has given me a new approach and a more expressive way to paint. I’d definitely recommend his masterclass and hope to go to others in the future.